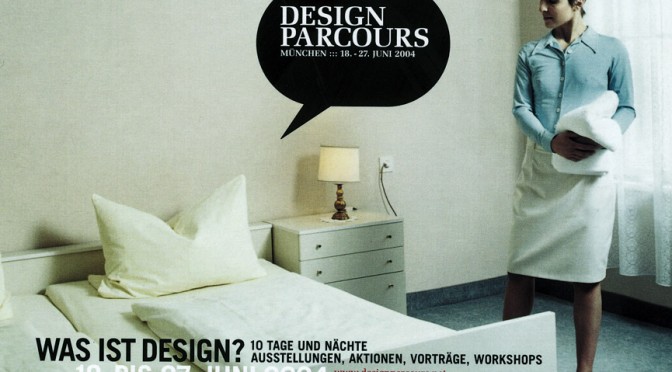 Back in 2004 a group of young designers and artists joined together in the design fair Designparcours which was by that time a most inspired as well as inspiring happening.

The topic that year has been „Was ist Design? – 10 Tage und Nächte Ausstellungen, Aktionen, Vorträge, Workshops“. It took place from 18.-27. June 2004. Numerous agencies and ateliers joined with open events and workshops. Nowadays it became the so called Munich Creative Business Week. Still an amazing event and most recommended.

In the year 2004 young designers and artists were invited to gather together as „Forum Junges Design – New Talents inszenieren ihre Ideen von Gestaltung“. That time most beautiful located in the Galerie der Künstler in Munich where also the Designkaufhaus of the event was located.

With my Master Project Blei & Bytes from my studies at Akademie für Gestaltung München I had a chance in 2004 to participate in several exhibits. Starting with Talente, an exhibition of young talents at Internationale Handwerksmesse München, followed by Forum Junges Design and continued in the exhibition of Bayerischer Staatspreis für Nachwuchstalente, a series of welcome happenings started and made me realize that all the effort I have spend on every project from beginning to end was worth it.

Only with the support of very dear friends and support from my family it was possible to create the exhibition space in Forum Junges Design. Along with the Book Project Blei & Bytes I exhibited paintings from that period and asked the visitors to leave me a message and along with that their Typo and writing on Posits which they should attach it to the wall. From the first single ones up to the full wall it was a pleasure to come back and watch it every single day in that time.

Together with these friends we had a good time afterwards in 2004, I think it’s been one of my most exciting ones.  After 10 Days and Nights we had become friends. We kept meeting each other and some of us started an Initiative called Designretour. Our two main official Projects: Blickfang Wien – LOS!, 2004 and Kulturnacht Schweinfurt – Ehrung der Alltagshelden, 2004. Somehow all other plans disappeared and we didn’t continue our inspired work together.